When Gov. Jay Inslee issued a stay-at-home order in March 2020, Seattle accountant Danie Baker took her work supplies home and started preparing tax documents from her house on Beacon Hill. During the coronavirus pandemic, Baker worked from home and couldn’t see her friends. So like so many other Americans during the pandemic, with all that extra time on her hands, Baker engrossed herself in baking.

She shared pictures of her cakes and cookies on social media, and her friends started asking her for recipes. So instead of tiring her thumbs texting instructions over and over, Baker made a food blog, Hey Danie Bakes. She launched it at the end of July 2020, and shortly after, a casting coordinator from “Top Chef” reached out and invited her to apply to be in a TV show.

Less than a year later, Baker, who’s 32, will watch herself bake and cook on TV for famous cookbook author Gail Simmons when her episode of “Top Chef Amateurs” airs on the Bravo network at 9 p.m. July 22.

“Top Chef Amateurs” is a spinoff of the popular “Top Chef” cooking competition show, which recently concluded its 18th season. Unlike the original “Top Chef,” a season-long competition among a group of chefs, each “Top Chef Amateurs” episode works as a stand-alone competition between two home cooks who lead teams of former “Top Chef” contestants through various cooking challenges. In Baker’s episode, she competes against Steven DeCarlo, a hairstylist and amateur cook from New York City for a $5,000 prize. The season was filmed in Portland in the fall. Baker says being selected for the show gave her confidence in her culinary skills and she’s now working to make food her career.

And to think she had to be persuaded to even apply to be on the show. Baker, a Seattle-area native, says she was initially unsure about whether to apply. She’d been baking since she was a little kid, but she’d only ever cooked for family and friends.

“I was like, ‘I’m not ready for this. There’s no way I’m qualified. I’m not going to apply for something that I’m going to just get rejected from,’” Baker says.

But her younger sister, Nicole Remy, encouraged Baker to put her all into the application. “I [knew] that she has the talent and the personality and the skill to shine,” Remy says. She was right — Baker was ultimately accepted for the show.

On a recent Wednesday afternoon, Baker scooped flour out of a big ceramic jug and into the bowl of a turquoise KitchenAid mixer she keeps on the granite counter in her kitchen. She measured out sugar, baking soda, baking powder and salt and put it all in the bowl. That day, channeling an experimental spirit that’s always come naturally to her in the kitchen, she put a twist on her classic sugar cookie recipe by adding honey and lavender.

“I’ve never done this before, so we’ll see what happens,” she said.

Baker got her start in the kitchen by helping her grandma bake cookies during Christmastime. She remembers fighting with her siblings to lick cookie batter off spoons and spatulas as a kid. Baker says her grandma studied food science at Xavier University and was as prolific a baker as herself, making 20 types of cookies every Christmas. Her mother baked a rum cake every Christmas, too, and Baker sees her pastries as a continuation of a matriarchal family legacy.

As Baker got older, she started baking on her own and found it to be a powerful creative outlet. After days spent sitting in classes in high school, she spent evenings baking with friends. Back then, recipes couldn’t be found with a quick Google search, so instead, she made her own. Once, Baker spent months perfecting an apple crisp.

For Baker and her family, the kitchen is a place of comfort and celebration, and she says she wants to share that with the world. Recently, she had a Fourth of July party with 75 people. Baker and her mother cooked for everybody, and she says it was “like second nature.” Remy calls her a natural host with a “TV personality.”

While making the honey lavender cookies, Baker narrated as if she already had her own show as she poured the eggs into the mixer: “We’ve cracked the egg in a bowl first so that we make sure there’s no shells in it.”

Baker slid the mixer bowl out and dropped little balls of batter onto parchment paper on a baking sheet using quick, precise movements with a cookie scoop. She slid the sheet into the oven. And 10 minutes later, she pulled out the final product: light brown cookies with a crispy crust on the bottom, the dough light but chewy, with a hint of honey and an uplifting lavender flavor.

Baker says she started baking more seriously after she graduated from the University of Portland and got her own place working as an accountant in San Francisco. Back then, Baker tried her hand at a food blog. But she says the pictures were “horrible.” She quickly gave up.

Inslee’s stay-at-home order finally gave Baker the time to do a blog right — with a well-designed website, a domain name and food styling, plus help from Remy, who studied design in college. In September, Baker bought a 35mm camera and swapped the iPhone photos for higher-quality shots.

Baker posts recipes for all kinds of things on her blog, from sweets to salads, soups and even cocktails. But her passion lies in sweets — they’ve always been her favorite thing to eat.

With “Top Chef Amateurs” under her belt, Baker’s now looking to launch a career in food media. She says she’s starting a YouTube channel soon and releasing an e-book on her blog with summer recipes, with the hopes she’ll get her own TV show soon.

Baker says being on “Top Chef Amateurs” gave her the confidence to put together a good dish or pastry without a recipe under pressure, as she was forced to in the show’s challenges. She says the show also spurred her creativity — she might not have made a honey lavender cookie a year ago.

“I think it would be really fun to have a show where I’m cooking things that people are a little intimidated by, and just show them it’s not that hard,” Baker says.

Deliciously sweet with a hint of summer lavender!

Enjoy warm with a scoop of ice cream, or in the morning with coffee — up to you!

Keeps in a zip-top bag at room temperature for three days.

Cookbook on improvising in the kitchen area assists reignite inspiration

Wed Jul 14 , 2021
Sam Sifton, foods editor for The New York Instances, encourages his readers to embrace experience in their cooking, belief their possess talent and produce a lot more confidence in their capacity to develop tasty food items with no dependent on classic recipes’ comprehensive guidelines and quantities. That’s the genesis of […] 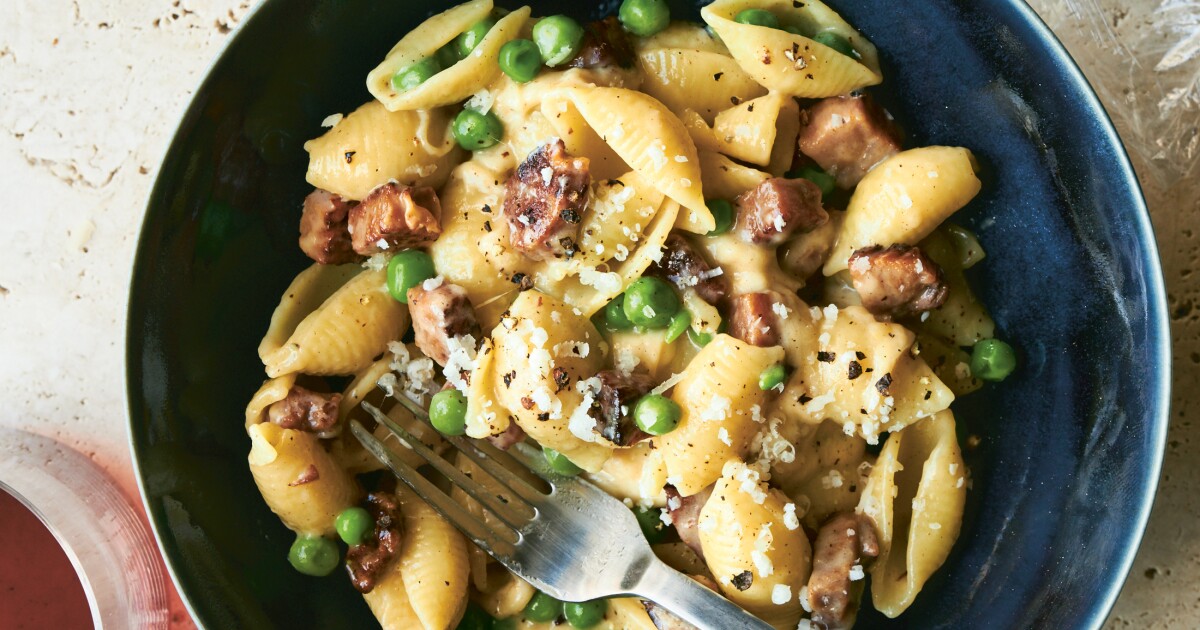