the founder of the Ferrari sports car brand and Formula 1 racing team, was a disciplined man who liked his routines. The former race car driver turned Italian industrialist rarely left his home region of Emilia-Romagna. Most days you could set your watch by his arrival for lunch at Ristorante Cavallino, a modest company-owned trattoria across from the Ferrari factory in Maranello, named for the prancing horse logo on the cars he produced.

From the 1950s until his death in 1988, Enzo held court at the restaurant in his private room, hosting business banquets and post-race debriefings with his Formula 1 drivers. Hollywood stars, heads of state and other VIPs who were in town to collect their new cars would also stop in for a meal with Il Commendatore, as Enzo was known by his Formula 1 Scuderia racing team. A bottle of local Lambrusco was always on ice.

“For my father, every meeting, with any person…would end with lunch or dinner at Cavallino,” says Enzo’s son, Piero, who began working alongside his father around 1965 and is now vice chairman at Ferrari.

After Enzo’s death, the restaurant remained a pilgrimage site for Ferrari fanatics, serving its simple regional cooking—tortellini, lasagna, zampone—among an overabundance of signed helmets, driver headshots and other Formula 1 keepsakes. It shut down in late 2019.

“
“It’s an encounter between Enzo Ferrari and Massimo Bottura, two institutions meeting in the Cavallino space.”
”

This summer, Cavallino reopens as a destination for contemporary design and gastronomy. Its once cluttered dining rooms have been reimagined by Parisian architect and designer India Mahdavi, its menu remastered by Emilia-Romagna’s best-known avant-garde chef, Massimo Bottura, of the three-Michelin-starred Osteria Francescana in neighboring Modena. “It’s an encounter between Enzo Ferrari and Massimo Bottura…two institutions meeting in the Cavallino space,” says Mahdavi of her design, which mixes the retro and modern with a pixelated prancing horse logo as a recurring motif on wallpaper and Bisazza glass tile and vintage Ferrari Yearbook covers blown up into dining room art.

The relaunch coincides with this month’s debut of Ferrari’s first high-end apparel collection, under in-house designer Rocco Iannone—formerly of Giorgio Armani—premiering with a men’s and women’s fashion show inside the Ferrari factory on June 13. With its new restaurant and clothing line as well as boutiques in Miami, Los Angeles, Maranello and Milan, the company hopes to evolve beyond cars to become a lifestyle brand, expanding into fashion, food, culture and entertainment, including its own branded Esports team and competition.

Bottura, the company’s new culinary collaborator, has ties to Ferrari going back to the mid-’90s, when Enzo’s granddaughter, Antonella, became a regular at Osteria Francescana. When her son, Enzo Mattioli Ferrari, was 7 or 8 years old, Bottura created a special tortellini dish for him, replacing cream with water in the sauce to accommodate his dietary restrictions. “We became very close friends,” says Bottura, of the Ferrari family. Mattioli Ferrari, now a business development and special projects executive at Ferrari, is working closely with Bottura on the Cavallino project.

The chef likes to talk up his region as the home of “fast cars and slow food.” “When you are a kid, going to the circuit in downtown Modena and checking out all the motorcycle drivers, Ferraris, Lamborghinis and Maseratis…you grow up with a sense of speed in your body, in your DNA,” says Bottura. Today Bottura has his pick of sports cars to drive through promotional deals with Ferrari and Maserati.

For his part, Enzo Ferrari preferred his pleasures familiar and close to home. He bought the old farmhouse that would become Cavallino just as he was launching his company in Maranello in 1942. He initially set up training facilities for his engineers there, along with the company canteen. By the 1950s the school and canteen had outgrown the space, and the building became a restaurant open to the public too. He set up his private room in the back, initially hidden behind sliding doors. In 1985 he entrusted management to a local developer, Giuseppe Neri—Beppe to his friends—who ran the restaurant until his death in 2015.

After Neri’s daughters took over the restaurant, and with the family’s contract expiring, Ferrari began to consider a new direction for Cavallino as part of a broad new push to expand the reach of the brand. In 2019 they brought in Iannone to develop apparel and Bottura as a new restaurant partner. Mahdavi, who had been working on a home design project for Ferrari’s executive chairman,

signed on to reimagine the trattoria space.

As lockdowns swept across Europe early last year, Mahdavi got to work with Bottura and the Ferrari team—on Zoom calls at first—on her initial proposal for a contemporary trattoria. “I really built the project in front of them,” she says. “You add layer and layer, through the Zoom, and they can see the space building. So the whole team was part of the design process.”

For inspiration, Mahdavi immersed herself in the elements of a classic trattoria—the archways, checkered tablecloths, family photos on the walls. She recovered the floors in red-brown and off-white terra-cotta tile, “as if you took a huge checkered tablecloth and just threw it on the floor,” she says. She encased the property in a moat of red walls, creating an oasis from the busy street with new outdoor dining under a thatched pergola and an expanded garden of new trees, potted plants and jasmine flowers from Milan-based landscape architect Marco Bay.

Inside and out she made reference to Ferrari’s signature colors, in muted tones of red and yellow. She designed swooping chairs wrapped in yellow leather, their shape inspired by car steering wheels. In a new grill room where Bottura’s chefs will work in the open behind a red lacquered bar—searing short ribs, eel and fresh vegetables over coals on a Josper grill—Mahdavi installed red vintage Cassina chairs designed by Vico Magistretti.

When she could eventually travel to Emilia-Romagna, Mahdavi joined Bottura in poring over selections from the Ferrari archive, vast storage facilities filled with historic car engines and Formula 1 cockpits, with vintage posters, photographs, technical drawings, original design sketches and in-house publications. (In February, the Neri family put up for auction their Cavallino memorabilia, which included gifts from Ferrari drivers and executives, with sales ranging from about $160 for a racing helmet to almost $175,000 for the fiberglass shell of Alain Prost’s 1990 season car.)

Mahdavi integrated choice pieces from the archives into her design plans, installing iconic engines, displayed like abstract sculptures under arches connecting a series of sunken dining rooms. Black-and-white stills of Enzo dining with his Formula 1 drivers line the stairs heading up to the first-floor balcony.

Enzo’s private room, hidden behind a door, has been preserved as a sanctuary, its walls covered in Italian poplar burl, its original fireplace restored, with a long shiny red table in the middle of the room and vertical slats on the windows. At lunch Ferrari clients might glimpse their new car for the first time, parked under the olive tree outside. “I wanted to make it quite theatrical,” says Mahdavi of Enzo’s old room.

Bottura and Cavallino’s head chef, Riccardo Forapani, plan to offer modern takes on the region’s traditional trattoria cooking. Bollito Misto, the classic boiled-meat feast, will be prepared sous vide. The chocolate custard in their deconstructed zuppa inglese, an old-fashioned layered dessert, will be foamed in a siphon. “We remind you we are in Modena, but using technology we give a super touch of lightness to a very heavy cuisine,” says Bottura. “Instead of using fat we improve the taste using technique.”

On the opening menu they’ll pay subtle homage to the Ferrari family and to the history and lore of the site. A dish inspired by the maccheroncini in pink sauce that Lina Lardi, Piero’s mother, used to serve at the family’s weekly Sunday lunch, is in the works.

Large ricotta-filled tortelli bundles will be served in butter and sage as a nod to a longtime Cavallino specialty, tortellini, consumed by Italian-American racing legend Mario Andretti when he arrived from the United States as a fill-in Ferrari driver in late summer 1982, after casualties left the team in the lurch for the upcoming Italian Grand Prix.

“He had some tortellini…and then he did the [lap] record on the Fiorano track,” recalls Piero Ferrari, who joined Andretti for lunch as he dined at Cavallino straight off the plane in Milan. Andretti came third in the Grand Prix at Monza. His tortellini-fueled record, he still remembers, stuck around for a while.

Mon Jun 21 , 2021
If you are seeking for a far too-straightforward-to-imagine appetizer, then this recipe is for you. It necessitates a mere three ingredients and just minutes to get ready. The asparagus are simply assembled in advance and ready to pop into the oven or on the grill when you are prepared to […] 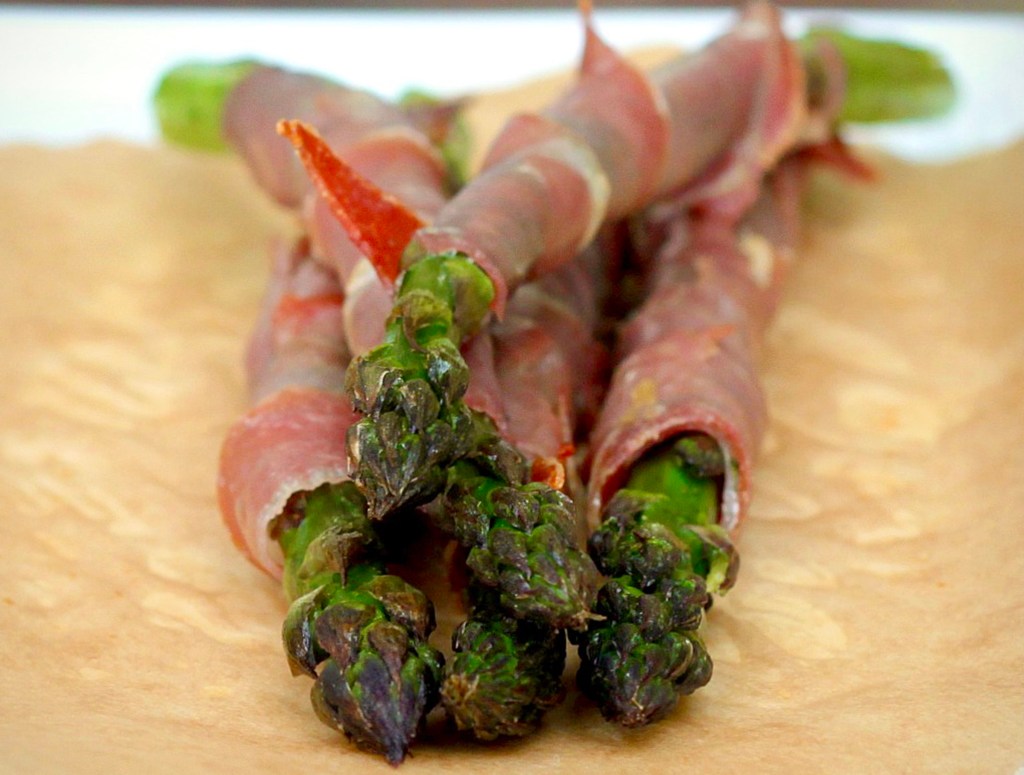